In modular arithmetic, one thinks of the whole numbers arranged around a circle, like the hours on a clock, instead of along an infinite straight line. One needs to decide at the outset how many “hours” our clock is going to have. It can be any number, not necessarily 12. As a first illustration, let’s suppose that we have seven “hours” on our clock—we say we are doing arithmetic modulo 7. 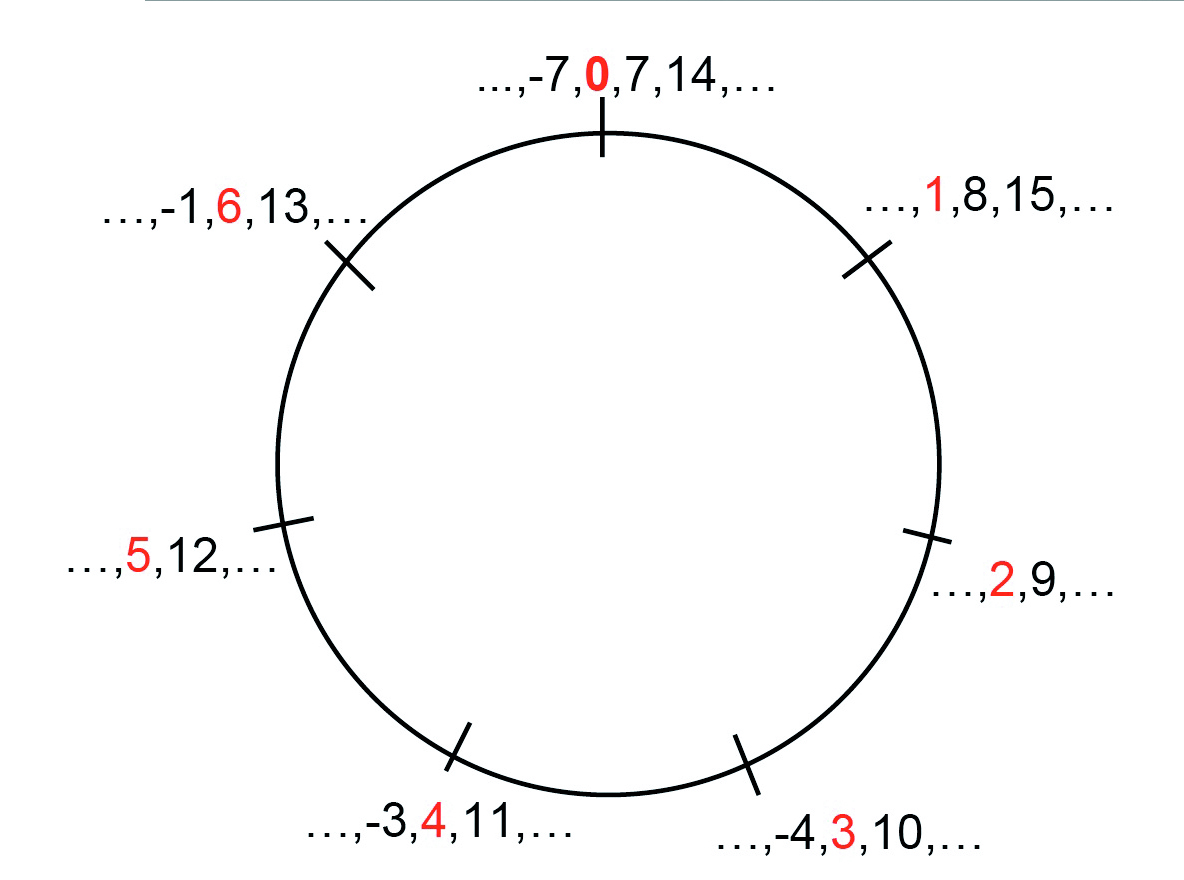 To illustrate a major reason why mathematicians care about modular arithmetic, let me start with one of the oldest questions in mathematics: Find Pythagorean triples, i.e., find whole number solutions, to the equation
X 2 + Y 2 = Z 2.
By Pythagoras’s theorem, this is the same as finding right-angled triangles all of whose sides have lengths that are whole numbers (when measured in the same units). For instance
32 + 42 = 52
and there is a right-angled triangle:

The 3,800-year-old Babylonian tablet Plimpton 322 lists Pythagorean triples. The second column of the tablet lists values for X and the third column the corresponding value of Z; the value of Y is not listed. 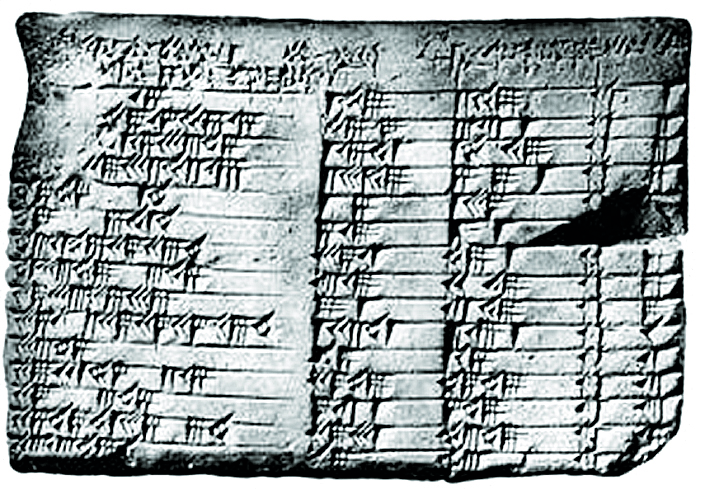 In modern notation, the solutions listed on Plimpton 322 are as follows:

It is noteworthy that some of these solutions are quite complicated, but we don’t know how they were generated. Could it have been trial and error, or did the Babylonians know an algorithm?

The first really great achievement in the study of modular arithmetic was Carl Friedrich Gauss’s proof in 1796 of his celebrated law of quadratic reciprocity, which had previously been conjectured by Leonhard Euler and Joseph Lagrange. This was supposed to have been Gauss’s favorite theorem, and he kept coming back to it during his life, giving eight different proofs. It states that

if p is a prime number, then the number of square roots of an integer n in arithmetic modulo p depends only on p modulo 4n.

On the face of it, this may not seem surprising, but I would stress that there is no apparent reason why trying to solve the equation
X 2 ≡ n mod p
should have anything to do with p modulo 4n. Thirty years after I first learnt how to prove this theorem, it still seems miraculous to me.

One could ask for a similar method that given any number of polynomials in any number of variables helps one to determine the number of solutions to those equations in arithmetic modulo a variable prime number p. Such results are referred to as “reciprocity laws.” In the 1920s, Emil Artin gave what was then thought to be the most general reciprocity law possible—his abelian reciprocity law. However, Artin’s reciprocity still only applied to very special equations—equations with only one variable that have “abelian Galois group.”

In the mid-1980s, Gerhard Frey, Jean-Pierre Serre (former IAS Member), and Kenneth Ribet (former IAS Member) showed that the Shimura-Taniyama reciprocity law, if true, would imply Fermat’s Last Theorem. Motivated by this, in 1995, Andrew Wiles (former IAS Member), partly in collaboration with the author, established many cases of the Shimura-Taniyama reciprocity law and hence finally proved Fermat’s Last Theorem.
Meanwhile, in the mid-1970s, Robert Langlands (Professor Emeritus, School of Mathematics) had the extraordinary insight that the ideas of Eichler, Taniyama, and Shimura were a small part of a much bigger picture. He was able to conjecture the ultimate reciprocity law, an enormous generalization of what had gone before, which applies to any number of equations, of any degree in any number of variables. In the last ten years, using the ideas introduced by Wiles, there has been much progress made on Langlands’s reciprocity conjecture, but much more still remains to be done.

One striking feature of all the non-abelian reciprocity laws is that the formula for the number of solutions is given in terms of symmetries of certain curved spaces—an extraordinary connection between solving algebraic equations and geometric symmetry. In the case of the Shimura-Taniyama reciprocity law, the relevant symmetries are those of the “hyperbolic plane.” The hyperbolic plane can be thought of as a circular disc (without its boundary), but with an unusual notion of distance. For two points near the center of the disc, their “hyperbolic” distance is similar to their usual distance, but distances are increasingly distorted near the edge of the disc. The hyperbolic plane and its symmetries were illustrated in some of Escher’s woodcuts, like the one below. In the hyperbolic world, all the fish in Escher’s print are to be thought of as having the same size. 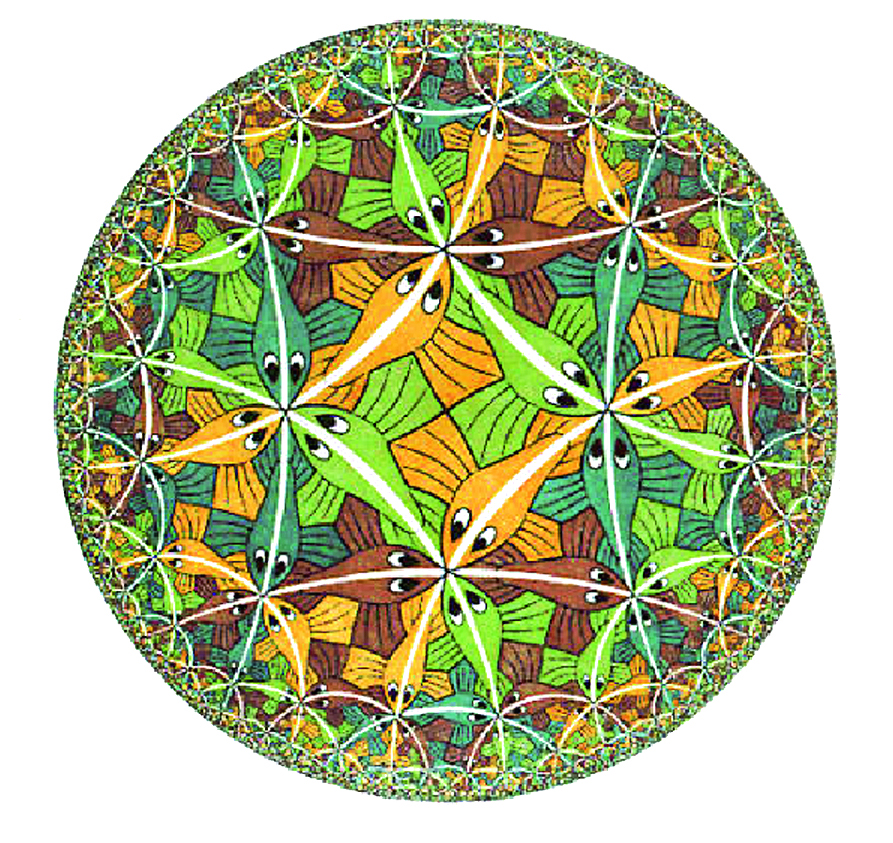 I will conclude by discussing one further question about modular arithmetic which has seen recent progress.

Instead of asking for a rule to predict how many solutions an equation will have in arithmetic modulo a varying prime p, one can ask about the statistical behavior of the number of solutions as the prime varies. Going back to the simple case of a quadratic equation in one variable, Lejeune Dirichlet showed in 1837 that for a fixed whole number m, which is not a prefect square, the equation
X 2 ≡ m mod p
has two solutions for half of all prime numbers p and no solutions for half of all prime numbers p. This may seem a natural answer, but Dirichlet’s proof was very subtle, combining Gauss’s reciprocity law with ideas from complex analysis. In 1880, Ferdinand Frobenius generalized Dirichlet’s theorem to any equation in one variable.

What about such density theorems for equations in more than one variable, like
Y 2 + Y = X 3 −  X 2?
In this case, Hasse showed in 1933 that the number of solutions in arithmetic modulo p, which we will denote Np , is of the same order of magnitude as p. More precisely, he showed that Np  differed from p by at most 2√p . He proved this for all cubic equations in two variables.
In 1949, Weil conjectured an enormous generalization of Hasse’s bound to any number of equations in any number of variables of any degree. These celebrated conjectures led to a revolution in arithmetic algebraic geometry. Weil’s conjectures were finally proved by Pierre Deligne (Professor Emeritus, School of Mathematics) in 1974.

Returning to the equation
Y 2  + Y = X 3 − X 2,
Hasse’s theorem tells us that asking for what fraction of primes this equation has—say, ten solutions in arithmetic modulo p—is not interesting; the answer will always be 0. Rather the natural question is to consider the normalized error term

Np − p
—
√p.
By Hasse’s theorem, this will be a (real) number lying between −2 and 2, and one can ask how it is distributed in this interval. Is the error often as large as Hasse’s theorem allows, or is it usually smaller and only rarely at the extreme? In 1963, Mikio Sato and John Tate (both former IAS Members) independently conjectured the correct density theorem—the error should be distributed like (1/2π) √4 − t 2, a “squashed semi-circle.” 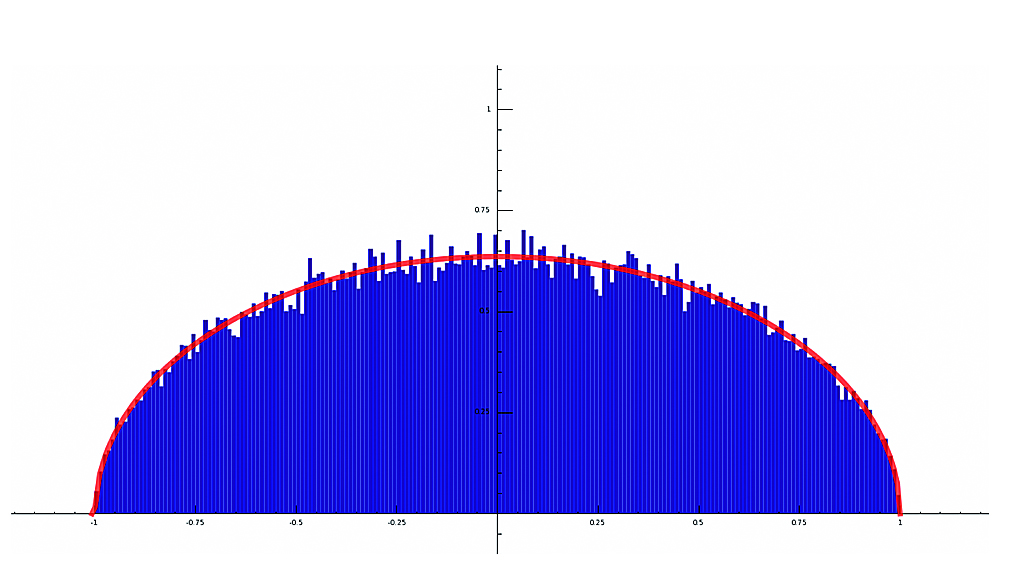 The Sato-Tate density theorem has recently been proven (by Laurent Clozel and Michael Harris, both former IAS Members; Nicholas Shepherd-Barron; and the author), not just for this equation, but for all cubic equations in two variables. The proof combines the arguments of Dirichlet and Frobenius with an infinite series of new cases of Langlands’s reciprocity law. There should, of course, be density theorems for any number of equations in any number of variables of any degree, but these remain very much conjectural. The story is continuing . . .

Richard Taylor, who became a Professor in the School of Mathematics in January, is a leader in number theory who, with his collaborators, has developed powerful new techniques that they have used to solve important long-standing problems. With Andrew Wiles, he developed the Taylor-Wiles method, which they used to help complete the proof of Fermat’s Last Theorem. Together with Fred Diamond, Brian Conrad, and Christophe Breuil, he resolved completely the Shimura-Taniyama-Weil Conjecture in the theory of elliptic curves. With Michael Harris, he proved the local Langlands conjecture. More recently, Taylor established the Sato-Tate Conjecture, another longstanding problem in the theory of elliptic curves.

The Abel Prize and Curiosity-Driven Research

Modern Mathematics and the Langlands Program