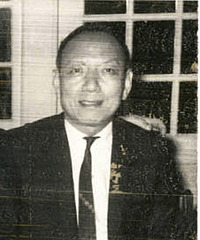 Shiing-Shen Chern (1911–2004) was a Chinese mathematician internationally recognized as the foremost differential geometer of his time. Chern was a Member in the School of Mathematics at the Institute for Advanced Study on numerous occasions beginning in 1943 through 1964.

Over the years, he maintained close ties with the Institute, in particular with Phillip Griffiths, the Institute’s former Director (1991–2003) and current Professor Emeritus in the School of Mathematics, on whose work he was a major influence. In 2007, Griffiths edited Inspired by S. S. Chern: A Memorial Volume in Honor of A Great Mathematician (World Scientific Press). The volume contains contributions by former colleagues, students, and friends of Chern. “More than any other mathematician, Shiing-Shen Chern defined the subject of global differential geometry, a central area in contemporary mathematics. In work that spanned almost seven decades, he helped to shape large areas of modern mathematics,” according to Griffiths. “I think that he, more than anyone, was the founder of one of the central areas of modern mathematics.” Of his relationship with Chern, Griffiths noted, “He took great pleasure in getting to know and working with and helping to guide young mathematicians. I was one of them.”

While at the Institute, Chern developed his work on the Gauss-Bonnet formula, of which he said in 1992: “I still consider this my best piece of work.” Among his many honors, he was the recipient of the first Shaw Prize in Mathematical Sciences in 2004. In a letter to IAS Director Frank Aydelotte on February 23, 1946, Chern wrote, “The years 1943–45 will undoubtedly be decisive in my career, and I have profited not only in the mathematical side. I am inclined to think that among the people who have stayed at the Institute, I was one who has profited the most, but the other people may think the same way.”

Chern considered his stay at the Institute as a turning point in his career, and it also had a major impact on the field of mathematics. According to an obituary of Chern from the University of California-Berkeley, Chern’s sojourn at the IAS from August 1943 to December of 1945 changed the course of differential geometry and transcendental algebraic geometry while changing his life as well.

It was during his time in Princeton that Chern discovered an intrinsic proof of the n-dimensional Gauss-Bonnet formula, which was the forerunner of other invariants that bear his name: Chern classes, Chern-Weil homomorphism, and Chern-Simons invariants. Chern-Simons invariants were first described in a paper in 1974, coauthored by Chern and James Simons, former Member in the School of Mathematics (1972–73), and current Trustee of the Institute. In 1982, Chern worked with Calvin Moore (Member, 1964-65) and I. M. Singer (Member, 1955-56, 1975-76) to establish the Mathematical Sciences Research Institute (MSRI) in Berkeley. In addition to helping establish MSRI and serving as its first director, Chern founded mathematics institutes at the Academia Sinica in Nanking and at his alma mater, Nankai University in Tianjin.