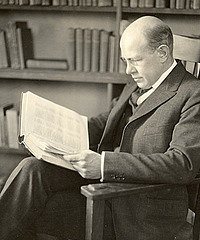 From the National Academy of Sciences:

Frank Aydelotte was a man of great intellectual and athletic ability and a talented academic administrator, who pursued graduate work in English literature at Harvard University and studied thereafter as a Rhodes fellow at Oxford University. He taught English literature at Indiana University, moved to the Massachusetts Institute of Technology in 1915, became president of Swarthmore College in 1921, and Director of the Institute for Advanced Study in 1939. Frank Aydelotte established a program of honors seminars and student concentrations at Swarthmore that brought the college into the first rank of American colleges. He was American Secretary of the Rhodes trustees (1918–52), chairman of the education advisory board of the John Simon Guggenheim Memorial Foundation (1925–50), and held many other advisory positions relating to education, government, and international affairs.

The Electronic Computer Project at IAS