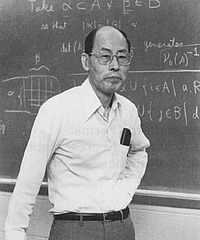 From the New York Times:

Goro Shimura was a number theorist whose insights provided the foundation for the proof of Fermat’s Last Theorem and led to tools widely used in modern cryptography.

Shimura once said that his guiding philosophy was that many geometric objects have a natural way of being presented other than the conventional mathematical expressions. This thinking led him to solve many longstanding problems and raise new areas of inquiry. In 1964, he formulated an important conjecture, building on the work of his friend Yutaka Taniyama, that suggested a surprising relation between elliptic and modular curves. That conjecture turned out to be key to Andrew Wiles’ solution of Fermat’s Last Theorem.

[. . .] Shimura later expanded his work, and mathematicians now routinely talk about “Shimura varieties,” a fundamental concept in that area of mathematics. His work also permeates modern-day cryptography. Researchers use Shimura’s ideas on elliptic curves to figure out how to devise encryption techniques that are harder to crack, and to decipher other people’s secret messages.

The Abel Prize and Curiosity-Driven Research