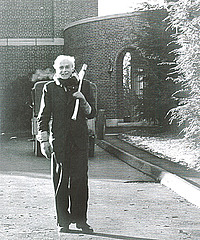 Dirac’s work has been concerned with the mathematical and theoretical aspects of quantum mechanics. He began work on the new quantum mechanics as soon as it was introduced by Heisenberg in 1925—independently producing a mathematical equivalent that consisted essentially of a noncommutative algebra for calculating atomic properties—and wrote a series of papers on the subject, published mainly in the Proceedings of the Royal Society, leading up to his relativistic theory of the electron (1928) and the theory of holes (1930). This latter theory required the existence of a positive particle having the same mass and charge as the known (negative) electron. This, the positron, was discovered experimentally at a later date (1932) by C. D. Anderson, while its existence was likewise proved by Blackett and Occhialini (1933 ) in the phenomena of "pair production" and "annihilation".

The importance of Dirac’s work lies essentially in his famous wave equation, which introduced special relativity into Schrödinger’s equation. Taking into account the fact that, mathematically speaking, relativity theory and quantum theory are not only distinct from each other, but also oppose each other, Dirac’s work could be considered a fruitful reconciliation between the two theories.

1933
Nobel Prize in Physics
In the Media