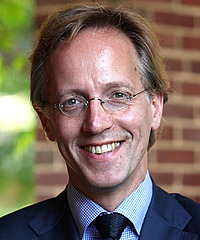 Robbert Dijkgraaf, Director of the Institute for Advanced Study and Leon Levy Professor since July 2012, is a mathematical physicist who has made significant contributions to string theory and the advancement of science education. His research focuses on the interface between mathematics and particle physics. In addition to finding surprising and deep connections between matrix models, topological string theory, and supersymmetric quantum field theory, Dijkgraaf has developed precise formulas for the counting of bound states that explain the entropy of certain black holes. For his contributions to science, Dijkgraaf was awarded the Spinoza Prize, the highest scientific award in the Netherlands, in 2003, and was named a Knight of the Order of the Netherlands Lion in 2012. Dijkgraaf has been conferred honorary doctorates from Leiden University, Vrije Universiteit Brussel, and Radboud University Nijmegen and is a member of the American Academy of Arts and Sciences and the American Philosophical Society.

Past President (2008–12) of the Royal Netherlands Academy of Arts and Sciences, past President (2016–17) of the InterAcademy Partnership, and past Co-Chair (2009–17) of the InterAcademy Council, Dijkgraaf is a distinguished public policy adviser and passionate advocate for science and the arts. Many of his activities—which have included frequent appearances on television, a monthly newspaper column in NRC Handelsblad, several books for general audiences, and the launch of the science education website Proefjes.nl—are at the interface between science and society. In 2017, Princeton University Press published The Usefulness of Useless Knowledge in which Dijkgraaf and IAS founding Director Abraham Flexner articulate how essential basic research and original thinking are to innovation and societal progress, a belief that has informed the mission of the Institute for ninety years.