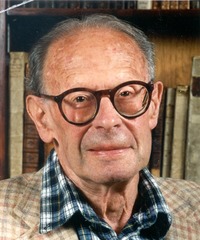 André Weil . . . whose work in algebraic geometry and number theory recast the basics of mathematics . . . was considered an intellectual peer of colleagues who were among the century’s most influential scholars, Albert Einstein, J. Robert Oppenheimer, the mathematician John von Neumann, and the logician Kurt Gödel among them.

In 1994, Dr. Weil (pronounced VAY) . . . received the Kyoto Prize in Basic Science from the Inamori Foundation of Kyoto, Japan. That award honored the part of his work known as the Weil conjectures, which provided the principles for modern algebraic geometry. The patterns of numbers that Dr. Weil discovered are now applied, for example, in writing almost-unbreakable secret codes and in enhancing the accurate transmission of computer data.

Other applications of his work can be found in elementary particle physics. . . . [and] he introduced ideas of topology—the study of geometric figures—into arithmetic, permanently changing the way scholars study the science of computing by numbers.