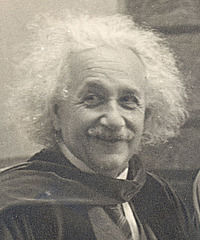 Past Faculty
School of Mathematics (NS)

Physicist Albert Einstein (1879–1955) was one of the Institute’s first Faculty members, serving from 1933 until his death in 1955, and he played a significant part in its early development.

Einstein came to the United States to take up his appointment at the Institute at the invitation of Abraham Flexner, the Institute’s founding Director. During his time as an Institute Faculty member, Einstein pursued the goal of a unified field theory, and did so at a time when the goal of unifying the four fundamental forces of nature—gravity, electromagnetism, the strong nuclear force, and the weak nuclear force—had been set aside by the majority of working physicists. In recent years, this has again become a central goal of physicists and string theory has become the favored candidate to provide a framework for a unified understanding of the basic laws of the physical universe.

For additional information on Einstein’s life and his great works of 1905, please visit two special sections of the Institute’s website, In Brief and The Great Works. You may also explore source documents at http://einsteinpapers.press.princeton.edu.

Einstein and the American City