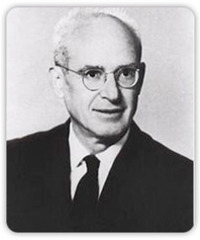 From the New York Times:

“From 1934 to 1936, [Nathan Rosen] was a young assistant to Einstein and jointly wrote several scientific papers with him. The one that can still raise hackles with physicists was written with Boris Podolsky, another assistant to Einstein. It was published in The Physical Review, one of the most impenetrable periodicals in the English language.

It advanced a "thought experiment" to show the wrong-headedness of the quantum theory, which many scientists of the time found highly unpalatable. Einstein deemed it something akin to magic. The paper pointed out conceptual problems that the authors had with the theory and what they saw as its paradoxical and contradictory aspects. . . .

The paper drew a sharp response from Niels Bohr, and quantum theory has since been widely accepted. Scientists use it as a primary tool to predict the interactions of atoms, molecules, elementary particles and radiation; it plays a role in virtually all the chemical and physical reactions that control our lives and the world around us.

Dr. Rosen, who eventually accepted the theory, received a bachelor's degree in electrochemical engineering, and a master's and, in 1932, a Ph.D. in physics from the Massachusetts Institute of Technology. He worked as a national research fellow at the University of Michigan and Princeton University, where he developed a lifelong interest in gravitation.”