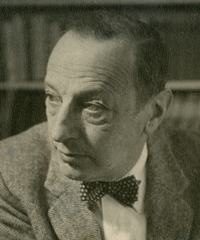 From The Times Literary Supplement: “The Institute for Advanced Study in Princeton, which had been founded in 1930 by another admirer of Kantorowicz, Abraham Flexner, was delighted to welcome the newly unemployed medievalist. The eminent art historian Erwin Panofsky, likewise a refugee from Nazi Germany, was at first wary about the author of Kaiser Friedrich der Zweite and even asked a colleague if Kantorowicz was “dangerous.” But after learning of the stand he had taken at Berkeley, Panofsky became his champion and later one of his closest friends. Other luminaries at the Institute also soon warmed to the vivacious newcomer, including Robert Oppenheimer, then its Director, as well as George Kennan, who described Kantorowicz in his memoirs as “a man of ineffable Old World charm” and “an essential feature of the Princeton of the 1950s.”

From the New York Times:  “[I]t was only after he moved to the Institute for Advanced Study in Princeton that in 1957, at the age of 62, Kantorowicz finally published the book that made his reputation: “The King’s Two Bodies.” With its dizzyingly erudite analysis of the evolving distinction between the king’s physical, biological being and the “supra-individual personage of the Dignity,” Kantorowicz opened new channels of thought for reflection on the construction and implementation of state power. Marshaling a highly original medley of sources, from arcane legal documents to sarcophagi, mosaics, coins, ivory book covers and architectural flourishes, Kantorowicz proposed that the king’s natural body in the early Middle Ages was doubled with a spiritually invested superbody.”