Throughout each academic year, the Institute offers lectures and special events that are open to the public, as well as the Edward T. Cone Concert Series and talks organized by the Institute’s Artist-in-Residence. The Artist-in-Residence Program was established in 1994 to create a musical presence within the Institute community, and to have in residence a person whose work could be experienced and appreciated by scholars from all disciplines. In 2007, the concert series was named in honor of the late Edward T. Cone, a distinguished composer, musical scholar, and Princeton University Professor who had longstanding ties to the Institute. Artists-in-Residence have included Robert Taub, Jon Magnussen, Paul Moravec, Derek Bermel, Sebastian Currier, and David Lang.

Composer David Lang continues as Artist-in-Residence and curates the Edward T. Cone Concert series while pursuing his creative and intellectual work as part of the Institute's community of scholars.

David Lang is a Pulitzer Prize–winning composer who begins his second three-year term as IAS Artist-in-Residence. As part of his residency, Lang will pursue his creative work as part of the Institute community and exchange ideas with scholars from all disciplines. In an exploration of mastery, meaning, and experience, Lang will also curate the 2019–20 Edward T. Cone Concert Series and present a series of talks and special presentations, all connected by the theme of VIRTUOSITY.

Lang’s recent works include his opera prisoner of the state, which premiered in June 2019 with the New York Philharmonic; the score for Paolo Sorrentino’s film Youth, which received Academy Award and Golden Globe nominations; man made, a concerto for So Percussion and orchestra; anatomy theater, an opera written in collaboration with visual artist Mark Dion; the public domain, a commission from Lincoln Center for one thousand amateur singers; and the loser, an opera based on the novel by Thomas Bernhard, for which Lang served as librettist, composer, and stage director. Lang is Professor of Music Composition at the Yale School of Music and Co-Founder and Co-Artistic Director of New York’s legendary music festival Bang on a Can.

Lang became Artist-in-Residence in July 2016. His works have been performed worldwide by distinguished artists and ensembles, including the BBC Symphony, the International Contemporary Ensemble, eighth blackbird, Santa Fe Opera, the New York Philharmonic, the Netherlands Chamber Choir, the Boston Symphony, the Munich Chamber Orchestra, and the Kronos Quartet. A recipient of the prestigious Grammy Award, Lang has received numerous honors, including Musical America’s Composer of the Year, Carnegie Hall’s 2013­–14 Debs Composer’s Chair, the Rome Prize, the BMW Music-Theater Prize (Munich), and grants from the Guggenheim Foundation, the Foundation for Contemporary Performance Arts, the National Endowment for the Arts, the New York Foundation for the Arts, and the American Academy of Arts and Letters. 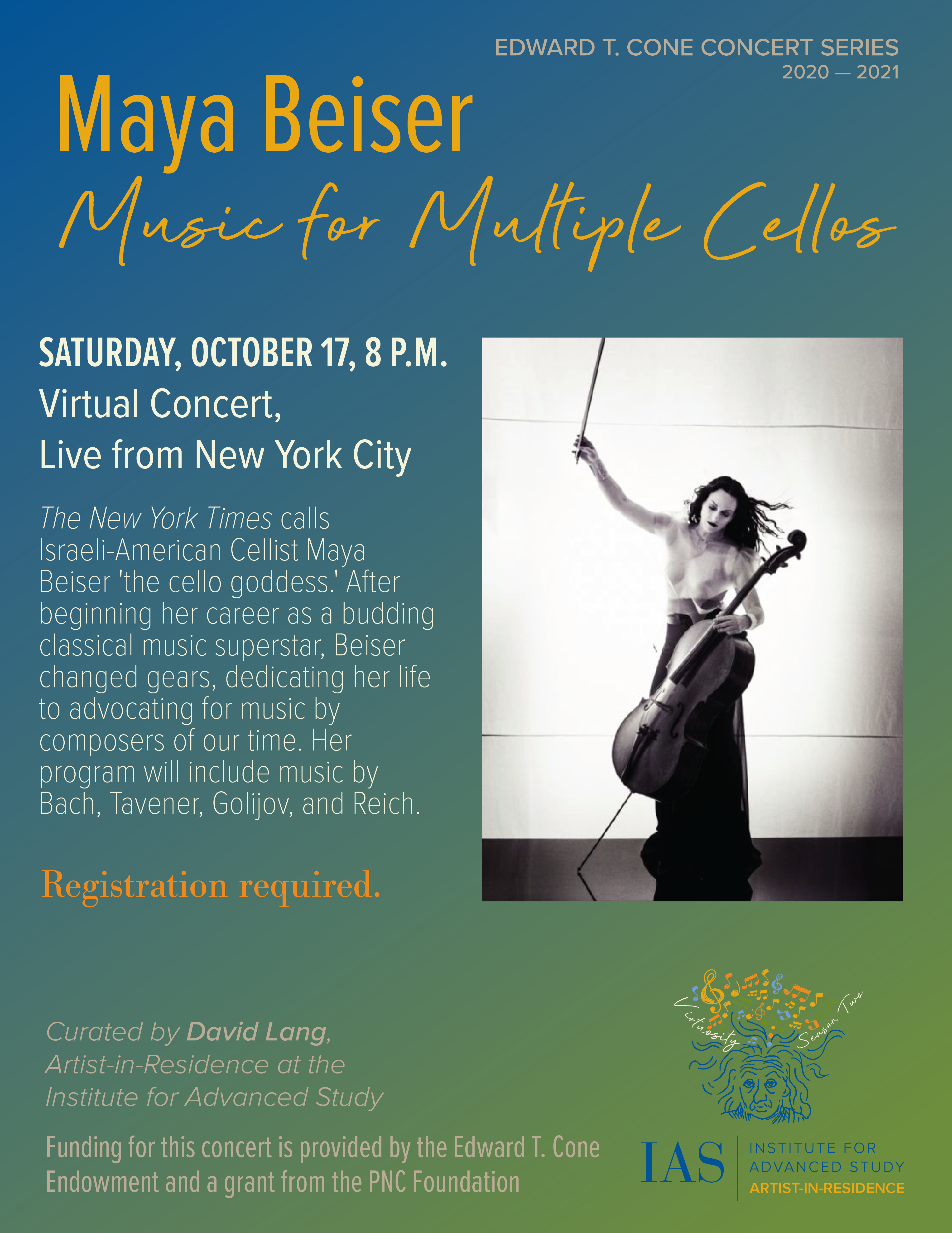 The New York Times calls Israeli-American Cellist Maya Beiser 'the cello goddess.' After beginning her career as a budding classical music superstar, Beiser changed gears, dedicating her life to advocating for music by composers of our time. Her program includes music by Bach, Tavener, Golijov, and Reich. 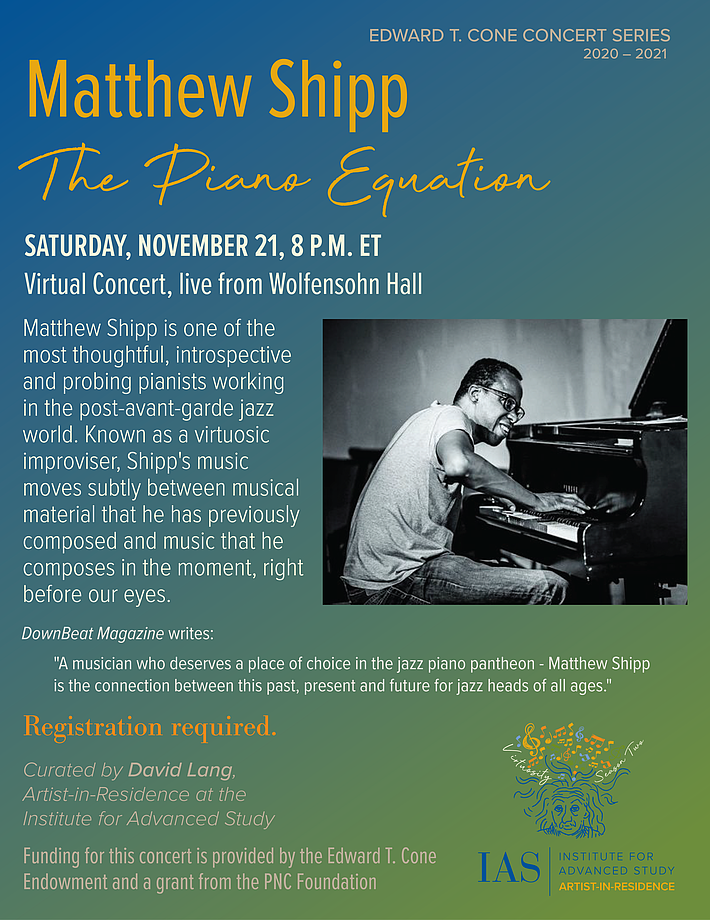 Matthew Shipp is one of the most thoughtful, introspective and probing pianists working in the post-avantgarde-jazz world. Known as a virtuosic improviser, Shipp's music moves subtly between musical material that he has previously composed and music that he composes in the moment, right before our eyes. 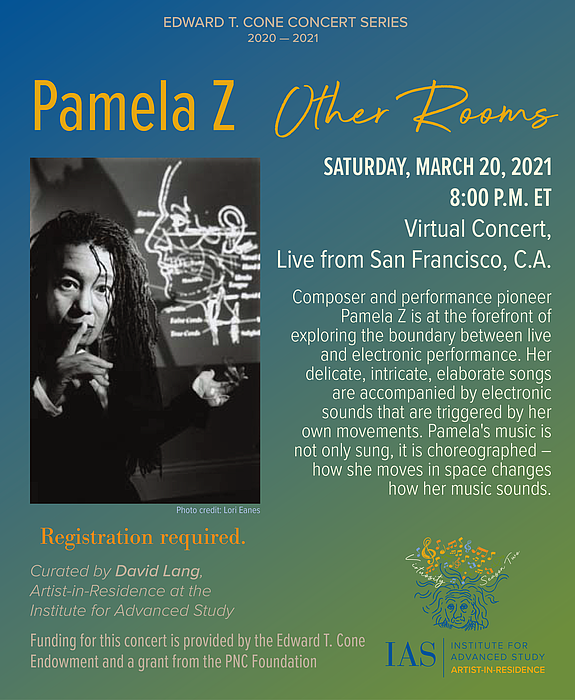 Composer and performance pioneer Pamela Z is at the forefront of exploring the boundary between live and electronic performance. Her delicate, intricate, elaborate songs are accompanied by electronic sounds that are triggered by her own movements. Pamela's music is not only sung, it is choreographed – how she moves in space changes how her music sounds. 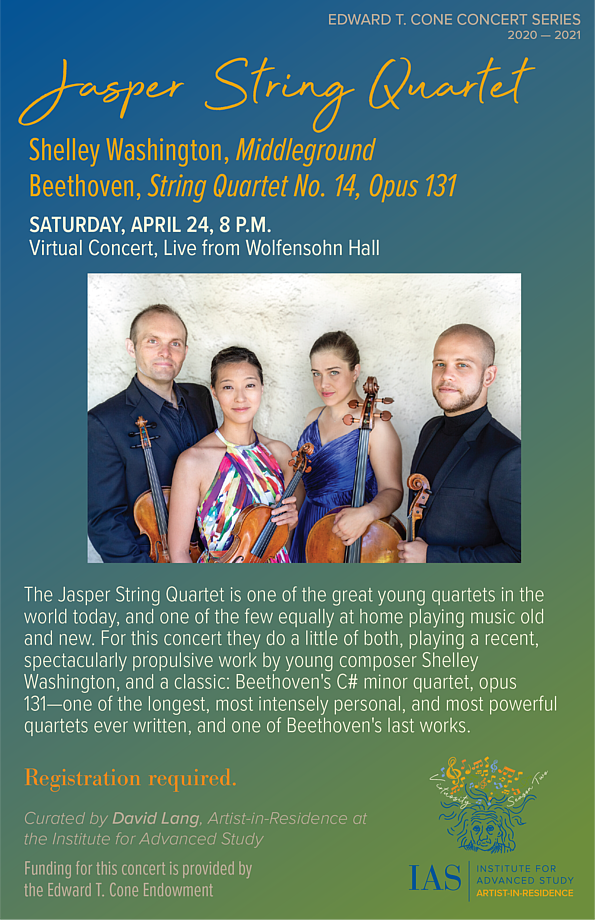 The Jasper String Quartet is one of the great young quartets in the world today, and one of the few equally at home playing music old and new. For this concert they do a little of both, playing a recent, spectacularly propulsive work by young composer Shelley Washington, and a classic: Beethoven's C # minor quartet, opus 131—one of the longest, most intensely personal, and most powerful quartets ever written, and one of Beethoven's last works.

Funding for this concert was provided by the Edward T. Cone Endowment.

Before people wrote our stories down, our poets would declaim them. The Odyssey, Tristan and Isolde, Beowulf—many of our literary classics have their roots in the spoken word, and they were recited for generations before anyone thought of trying to capture them on paper. It is speculated that music played a part in how such long and complicated stories could be remembered and retold—patterns in the text become underlined by patterns in the music, making them easier to keep straight. In a tour de force of storytelling, medieval music scholar and performer Benjamin Bagby recreates the experience of how music supports the telling of the story of Beowulf. The famed warrior comes alive as Bagby sings, speaks, intones and howls the story at us, in Anglo-Saxon, accompanied by medieval harp and with projected English supertitles.

**In order to help mitigate the growing risk of COVID-19 transmission, this concert is postponed.

We will send out an announcement when the event is rescheduled.**

How long is a piece of music? We don’t usually think of the duration of a piece of music as its most important feature. Most composers want us to pay attention to their use of melody, or harmony, or color, or form. But there are pieces that get their power from how short or how long they are, and composers have to do things differently to make us notice that the foreground of a piece is the time it takes to play it. The Flux quartet plays Stravinsky’s early Three Pieces—a complete and revolutionary work in three movements that only lasts 4 minutes—and is joined by pianist Vicki Ray in Morton Feldman’s lush, delicate, 80 minute-long Piano and String Quartet. 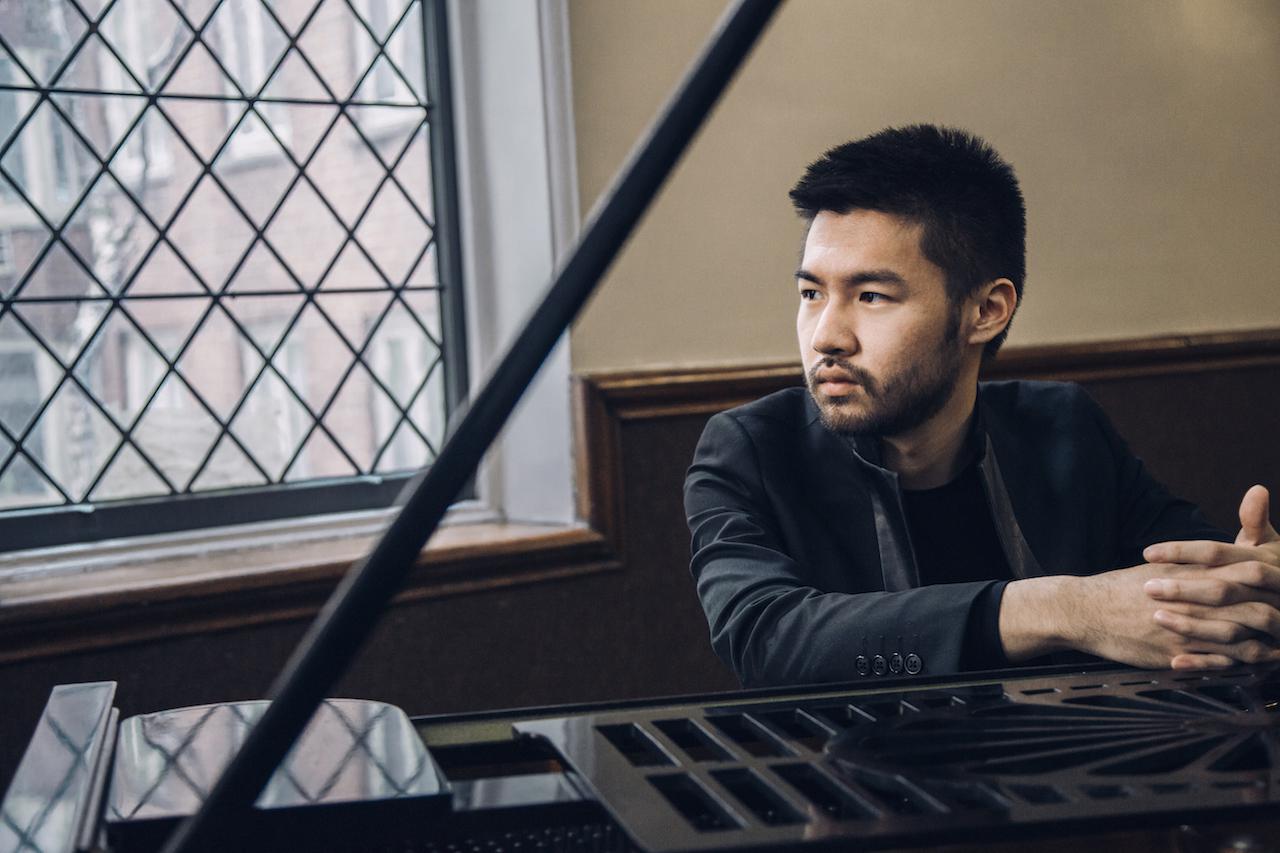 Above: A selection from Tao's album Voyages, and a sample of Schumann’s Kreisleriana, which Tao will perform at IAS.

This concert is supported by a grant from the PNC Foundation. 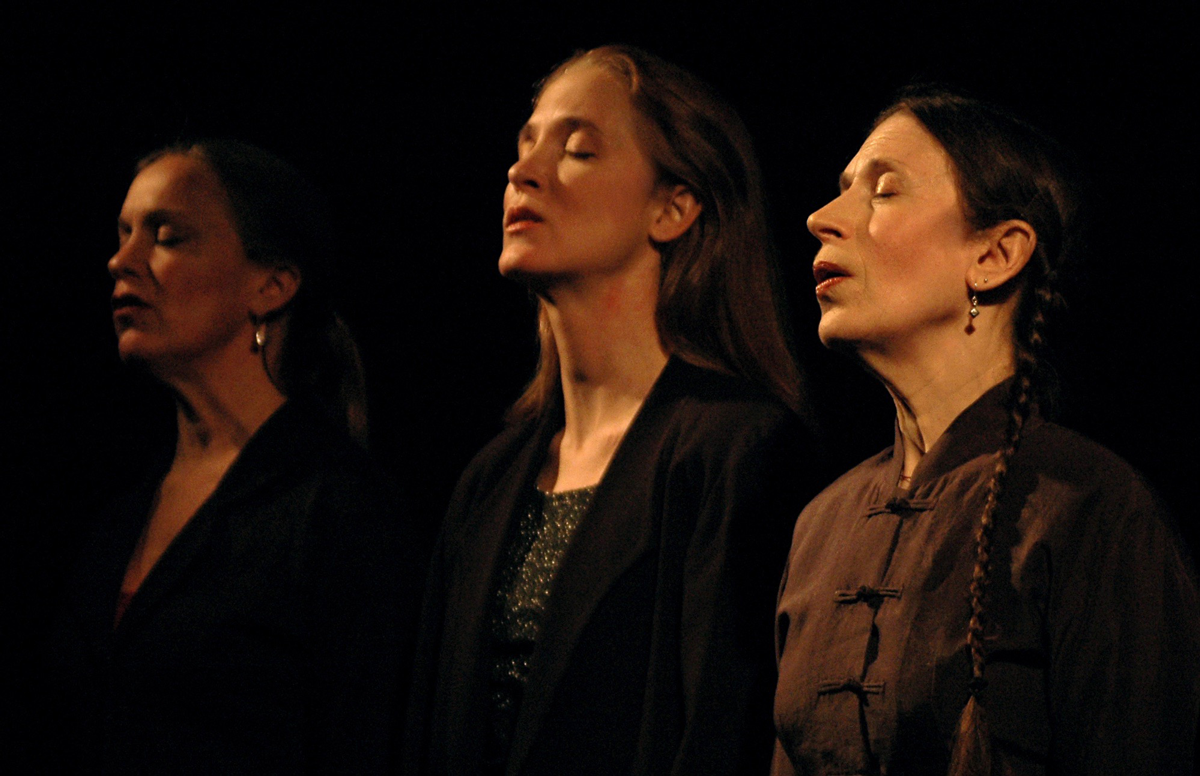 Meredith Monk is one of the world’s most inventive composers. She has had to be inventive—since the 1960’s she has pioneered a way of performing that is so genre defying that no individual existing medium or structure can wholly describe her. Starting as a singer and a composer she soon began mixing dance, theater, costume, and film into her performances. She invented her own sonic vocabulary that was beyond traditional language and notation. In order to make work that crosses so many boundaries she has had to invent her own way of making it, her own way of teaching it, and her own way of training a generation of singers and performers in how to perform it with her. The result is the creation of a way of singing that is unmatched in its immediacy, its intimacy and its invention.

At these concerts, Monk will be joined by renowned members of her Vocal Ensemble, Katie Geissinger and Allison Sniffin.

David Lang, Pulitzer Prize-winning composer, became Artist-in-Residence in July 2016. His works have been performed worldwide by distinguished artists and ensembles, including the BBC Symphony, the International Contemporary Ensemble, eighth blackbird, Santa Fe Opera, the New York Philharmonic, the Netherlands Chamber Choir, the Boston Symphony, the Munich Chamber Orchestra, and the Kronos Quartet. A recipient of the prestigious Grammy Award, Lang has received numerous honors, including Musical America’s Composer of the Year, Carnegie Hall’s 2013­–14 Debs Composer’s Chair, the Rome Prize, the BMW Music-Theater Prize (Munich), and grants from the Guggenheim Foundation, the Foundation for Contemporary Performance Arts, the National Endowment for the Arts, the New York Foundation for the Arts, and the American Academy of Arts and Letters. Lang is a Professor of Music Composition at the Yale School of Music and is co-founder and co-artistic director of New York's legendary music festival Bang on a Can.

Constructed between 1991 and 1993, the Institute for Advanced Study’s 220-seat Wolfensohn Hall was built to serve as both lecture and concert hall. As the first new construction since 1969, the auditorium was named for James and Elaine Wolfensohn. Mr. Wolfensohn, former President of the World Bank, is Chairman Emeritus of the Board of Trustees at the Institute. The hall has been called “an instrument for sound,” (U.S. 1, April 13, 1994) as its physical appearance suggests: the curving side wall panels, articulated by horizontal stripes of red fabric covering, are made of wood. To attain acoustical excellence, the project’s designer, Jeff Paine, worked closely with the Boston-based acoustical design firm, Acentech. The design features open trusses overhead, with nothing to stop the resonance of sound. The only structures which absorb sound are in the rear wall, inhibiting sound from bouncing back toward the stage. That Wolfensohn Hall turned out to be a fine concert hall is no accident: Mr. Wolfensohn is an amateur cellist and an old friend of violinist Isaac Stern. (Stern surprised the Institute community by playing the inaugural concert for Wolfensohn Hall in April 1993, and sharing the program with Wolfensohn’s daughter, Sara, an accomplished pianist.) Wolfensohn Hall’s architect, Caesar Pelli and Associates, is known for the Carnegie Hall tower and one of the Museum of Modern Art expansions and renovations, as well as Princeton University’s DeNunzio aquatic building. The designer, Jeff Paine, has served as project manager for some of the firm’s most high-profile creations – including Manhattan’s four-tower World Financial Center and the Pacific Design Center in Los Angeles.

The Institute is pleased to make concerts and related talks featuring well-known performers and others from the music world freely available to the community, and we are delighted with the large crowds that regularly attend the performances. IAS is committed to providing our concerts free of charge, and we invite you to help us sustain that commitment by making a contribution to support the Edward T. Cone Concert Series. Your gift, along with the gifts of others who have enjoyed these concerts, will help us to continue to develop and offer outstanding musical programs. Make an online donation or contact Kathleen Eastman for further assistance.