After the first Santa Fe workshop on limits to scientific knowledge in the spring of 1994, for two years Roger Shepard and I organized a number of small informal weekend workshops, in which we invited half a dozen or so colleagues for an intense series of discussions. The topics varied, but were always related to the question of whether there are intrinsic limitations to a scientific world view. Are there aspects of the world that are in principle inaccessible to a scientific mode of inquiry? If so, what can we say about those limitations, how do they arise, and what type of knowledge is able to bridge science and other ways of knowing?

While these workshops were stimulating and thought-provoking, at the same time they were frustrating in the sense that we did not get far enough, by a long shot. Each weekend we started with a different cast of characters, and invariably we would have just succeeded to sort out the meaning of the different terms and concepts we were using by the time the weekend came to a close. Having been left with so many loose ends each time, by the summer of 1996 we decided to try a different approach. Instead of changing participants each time, we began to look for members of a core group who would commit themselves to an ongoing discussion that would continue over a period of several years. 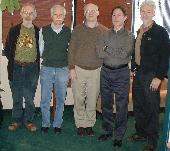 During the next half year, we met with Steven A. Tainer, a teacher of contemplative traditions in Berkeley with a background in philosophy of science; Bas van Fraassen, professor of philosophy at Princeton University; and Arthur Zajonc, professor of physics at Amherst College. Early in 1997 we decided to meet once every two month for an extended weekend, in order to develop and sort of our various forms of understanding of what a scientific world view can mean.

One of our first tasks was to come up with a name for our group. We thought about something like Institute for Science and Human Values. Although the acronym ISHVA had a nice ring to it, we agreed that it all sounded a bit too boring, and besides, the danger was large that such a name would peg us in a conceptual box we would not be comfortable with. So instead we started looking for a name with a less immediate meaning, in order to invite people to see for themselves what we were doing, rather than to judge us directly by our name. Around that time I mentioned over a drink that my colleagues and were working on a computer program called the kira code, where the Japanese word `kira' stood for the sound of half a star twinkling, there was a unanimous feeling that that term would be a perfect match for our fledgling institute.

After I got permission from my fellow kira coders, we adopted the name and in that same year we officially incorporated the The Kira Institute as a non-profit organization kira for research and education. The only drawback for me was that I sometimes have to do a double take when I get an email message with the word Kira in the subject, but I am getting used to suspend my judgment until I find a further clue as to which kira is involved.

The two main charters of the Kira Institute are research and education. Our research activities have been carried out through a series of extended weekend meetings, starting in the spring of 1997. As we summarize in our manifesto What else is true? (besides scientific insight), we share a way of thinking that gives experience priority to theory. In the spirit of a Socratic inquiry, we want to leave our goals and our methods open to question, but we intend to let experience be the ultimate arbiter over dogma. We want to look into the nature of `experience' and its relation to theory, as well as to the reality that theory and experience point at. As part of our investigations, we intend to evaluate attempts (some unconscious) to use science to define "the world," and assumptions that it could define the world.

Individually, we have benefitted greatly from these regular meetings, and echoes of the discussions there have penetrated many of our recent writings. We plan to summarize some of our conclusions in one of more book-length publications in the near future.

The other half of our activities concerns education. Starting in the summer of 1998, we have organized a series of yearly Kira Summer Schools. Most participants have been graduate students either in a branch of science or of science studies, such as the history, philosophy, or sociology of science. See the kira web site for information about current activities, and how to apply for participation.

When we announced the first summer school, I wrote a short piece