During the nineteen eighties it has become clear that the K/T mass extinction, 65 million years ago, has been caused by the impact of an asteroid or comet with a diameter of roughly ten kilometers. 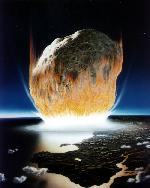 The first clear evidence was found in the form of an world-wide iridium layer, pointing to the presence of extraterrestrial material from the body of the impactor. The final proof came when the actual crater was found, with a diameter of almost 200 kilometer, buried under thick layers of sediment and located near Chicxulub on the Yucatan peninsula.

This impact coincided with the demise of the dinosaurs, as well as a significant fraction of species of animals and plants that were then populating the Earth. While we do not know yet many of the details of the effects of such a huge impact, it is clear that human civilization and perhaps even humanity itself would be threatened with extinction, were a similar impact to happen in the near future. Even a much smaller impact would wreak enormous havoc on local scales. For estimates of some of the effects of impacts, see e.g. a recent paper by O'Keefe, Lyons, and Ahrens (click on `Full Printable Article' to retrieve the texts, and see the table at the end of the paper). For an up-to-date list of current impact risks is maintained at NASA's Jet Propulsion Laboratory.

Fortunately, we are able in principle to avoid such a future impact, as long as we have sufficient early warning. One possible approach is to position a plasma engine on the surface of an asteroid, and to let it burn for a year or longer. There is no need to change the orbit of the asteroid very much, given that the Earth is such a small target within the vast space of the solar system. Even a change in velocity of 10 cm/sec will be enough to prevent an impact, if that change is made a few years before the predicted collision between the asteroid and the Earth. In contrast, it will not be possible to prevent an impact at the last moment, contrary to some recent movies, such as Deep Impact (which was quite realistic in a number of other aspects).

For up-to-date information about surveys and other developments, see the Asteroid and Comet Impact Hazards NASA web site, and the Spaceguard web site. For the first mission to an asteroid that actually landed on its surface, see NEAR Shoemaker's mission to Eros. For detailed information and a database of impact structures on Earth, see the Earth Impact Database.

Astrophysicist/astronaut Ed Lu and I organized an informal workshop on Deflecting Asteroids in October 2001, at the NASA Johnson Space Center in Houston. We explored the possibility of sending a plasma engine, powered by a nuclear reactor, to an asteroid in order to test the ability to alter the orbit of that asteroid.

We called our project "B612", which was the name of the small asteroid on which the Little Prince lived (from the novel Le Petit Prince by Antoine de St. Exupery).

We discussed various ways in which we could demonstrate the technology of altering the dynamics of an asteroid. Although the main goal will be to change the orbit sufficiently to avoid an impact on Earth, a first test could be the easier task of chaning the spin of a small orbit: either by despinning an asteroid, or letting it come apart (if it is a rubble pile) by spinning it up. The latter would form a very literal science `spin-off', which could provide enough information about internal structure to justify a mission in its own right. Or we could experiment with the companion of a double asteroid, in which we could alter the spin as well as the orbit of the smaller of the two asteroids. The two main component of such a mission would be formed by a plasma engine and a nuclear energy generator.

A year after we held our first workshop, we founded the B612 Foundation, with the stated goal to ``significantly alter the orbit of an asteroid in a controlled manner by 2015.'' While ambitious, we believe this to be possible. See our web site for announcements concerning further events and activities, and also our article:

For a brief statement on the goal of asteroid deflection, see my contribution:

and a related opinion piece:

See also the report of the conference on Scientific Requirements for Mitigation of Hazardous Comets and Asteroids.

Here is the abstract of a presentation we made about 2004 MN4 Apophis:

At the NASA NEO Workshop in Vail, Colorado, in 2006, June 26-28, we presented several white papers, among others: