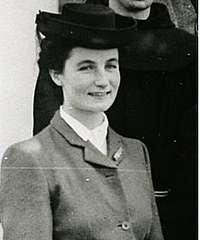 Described by Erwin Schrödinger as “among the best equipped and most successful of the younger generation of theoretical physicists,” Sheila Christina Tinney (née Power) is believed to be the first Irish woman to receive a Ph.D. in Mathematics. She was one of the first four women to be admitted to the Royal Irish Academy and the first female fellow of Dublin Institute of Advanced Studies.

Tinney moved to Scotland at the age of 23 to work under physicist and Nobel laureate Max Born at the University of Edinburg, where she earned her Ph.D. in Mathematics in 1941 for her work on the stability of crystals. After a fellowship at the Dublin Institute of Advanced Studies, she was appointed a teaching position at the University College Dublin, first as an assistant lecturer, then as a statutory lecturer.

In 1948, Tinney was granted a fellowship to come to the Institute for Advanced Study. At the Institute, she collaborated on papers with Nobel laureates Erwin Schrödinger and Hideki Yukawa on a wide range of topics, including wave mechanics, quantum electrodynamics, cosmic radiation, and meson theory.

She returned to the University College Dublin and taught mathematical courses on quantum mechanics. She served as an associate professor of mathematical physics and quantum theory from 1966 until her retirement in 1978.