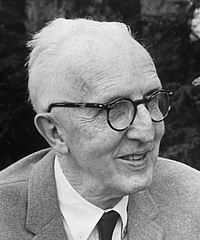 Past Faculty
School of Mathematics

From the University of St. Andrews:

[Marston] Morse developed variational theory in the large with applications to equilibrium problems in mathematical physics. This is now called Morse theory and it grew out of a major discovery which Morse made not long after returning to mathematics after the war and published in his important paper Relations between the critical points of a real function of n independent variables in 1925. Morse theory is important in the field of global analysis which is the study of ordinary and partial differential equations from a global or topological point of view. It builds on the classical results in the calculus developed by Hilbert and his students.

What distinguishes Morse from many other famous mathematicians is his single-minded persistence with a single theme throughout his life. However this theme, Morse theory, is perhaps the single greatest contribution of American mathematics. It was certainly not his only contribution, however, for in all he wrote about 180 papers and eight books on a whole range of topics. These include papers on minimal surfaces, some on the theory of functions of a complex variable where he was particularly interested in applying topological methods, papers on differential topology and on dynamics.

It is slightly surprising that the topics which most captivated Morse do not show up as such in this list, although in many ways they were still the motivation behind much of his work. From the time he undertook research as a postgraduate with Birkhoff he was directed to the major problems which had interested Poincaré such as the three body problem. He also wanted to produce a topological version of quantum theory, but this largely remained a dream which he never achieved.