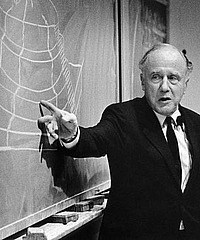 John Archibald Wheeler (1911-2008) was a leading theoretical physicist of the twentieth century, contributing particularly to the fields of general relativity, gravitation, and quantum mechanics. Wheeler was a pioneer in the study of black holes, celestial phenomena which he named. (He had a penchant for creating new terms in physics, and is credited with naming other phenomena such as geons, wormholes, and quantum foam.) Wheeler is also known for his work in atomic and nuclear physics. In 1939, he and Niels Bohr co-authored a paper that gave the basis for recognizing that Uranium 235 and Plutonium 239 are highly fissile, a milestone in the understanding of atomic energy. Wheeler believed in the importance of public service, assisting in the U.S. war effort to develop the atomic and hydrogen bombs, and served as a scientific advisor to numerous government agencies. During a prolific academic career that spanned seventy years, Wheeler taught physics to thousands of undergraduate students at Princeton University and the University of Texas, and mentored more than fifty Ph.D. students.

Do Our Questions Create the World?

Theoretical Physics: When the Doer Met the Dreamer