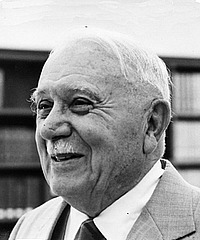 Past Faculty
School of Historical Studies

In a close-packed professional career of close on seventy years, Benjamin Meritt shed new light on many areas of the ancient Greek scene, especially on Athens in the days of her imperial greatness. […] Meritt's association with the Institute for Advanced Study at Princeton began in 1935. He was one of a group of four appointed in that year as charter members of the newly founded School of Humanistic Studies, now the School of Historical Studies. The appointment was proposed by Abraham Flexner, the first director of the Institute, who had himself begun as a teacher of Greek and Latin and who had come to know Meritt both by reputation and through sharing summers with Meritt's family on Lake Ahmic in Ontario. In his autobiography Dr. Flexner reports that a local resident, when informed of the prestigious appointment, replied, "Well, you kin never tell by looking at a frog how far he will jump."

The appointment to the Institute came at a propitious moment in Meritt's career. Relieved of all academic duties except to push on with his own research, he was able to concentrate on his two major commitments: the Athenian tribute lists and the inflow of new inscriptions from the Athenian Agora. The administrative flexibility of the young Institute made it possible for him to have with him from time to time at Princeton the other two members of the team of three who were now working intensively on the tribute lists. This remarkable linkage survived World War II and brought the project to a triumphant conclusion in 1953 with the publication of Volume IV of The Athenian Tribute Lists.

To facilitate the work on the tribute lists and on the new inscriptions from the Agora, Meritt built up in the Institute a first-rate epigraphic library, especially strong on the Athenian side. He also assembled a collection of many thousand "squeezes" (impressions on heavy paper) of Athenian inscriptions of all periods. This combination of facilities, made readily accessible in a convenient setting, has formed the physical basis for a center of epigraphic studies. The situation was made ideal by the hospitable atmosphere created by Meritt with the administrative support of the Institute.