The Undergraduate Summer School (USS) at PCMI provides a unique opportunity for undergraduate students to learn some fascinating mathematical ideas in a setting that allows them to interact with mathematicians at all levels. The program itself is centered around two lecture series, delivered by leading experts and in topics related to the main research theme of PCMI that summer. These lectures are often on topics typically not part of an undergraduate curriculum, but which will allow students to become familiar with key ideas and techniques in this field, often leading toward further research. The program is structured so that students at different levels have many opportunities to learn new things. One of the lecture series is directed toward students with somewhat less background, thus allowing students to gain experience with an interesting part of mathematics with fairly standard prerequisites, while the other may be slightly more specialized.  More advanced undergraduates often choose to attend some of lectures in the graduate minicourses as well.

The USS is open to undergraduate students at all levels, including during the summer just after completing their undergraduate studies. Participants are expected to be in residence for the entire three weeks of PCMI.

The USS is not like a typical REU in several ways.  The focus of the USS is more on the specialized lecture series and most importantly, the ability to interact informally with the many graduate students and researchers attending other parts of PCMI.  Students can get to know mathematicians who have pursued a wide variety of career paths, and they can get a sense of which of these paths may be most appealing to them. Many USS participants report making connections that strongly influence their choice of graduate school. This interaction is fostered by the various informal social activities open to all PCMI participants, as well as daily "cross-program activities," which include lectures and presentations on topics of general mathematical interest.

The lecturers and lecture series for the Undergraduate Summer School in 2019 will be:

The study of manifolds, and metrics and connections over them, has many profound links with modern theoretical physics. In particular, geometric invariants and deformation problems are closely connected to the way that particles and their interactions are described in gauge theory.  Important connections also exist to theories of gravitation (including Einstein's theory of general relativity) and many others, including string theory.

In this course we will provide an introduction to the geometry of manifolds and vector bundles oriented towards discussing gauge theories. We'll highlight some famous and interesting gauge theories through concrete computation including: the Yang-Mills theories (which give rise to the standard model in particle physics), Chern-Simons theories (which have been used to compute knot invariants), Einstein's Field Equations for gravitation, and Kaluza-Klein type-theories (a class of unified field theories that unify gravitation and electromagnetism).

Prerequisites: Linear Algebra, multivariable calculus, ordinary differential equations, and a first course in abstract algebra (basic group theory). Some familiarity with differential geometry at the level of curves and surfaces would be extremely helpful.

The study of low-dimensional topology is the study of spaces of dimensions 2, 3, and 4, including the study of surfaces and their symmetries, knots and links, and structures on 3- and 4-manifolds. It is an area of active research with deep connections to mathematical fields such as geometry and dynamics; it also has modern applications to microbiology, chemistry, and quantum physics. It requires a different set of tools from higher dimensional topology.

In this course we will cover some foundational results of low-dimensional topology. In two dimensions, we will study surfaces, their symmetries, and the mapping class group, proving a beautiful theorem of Lickorish that the mapping class group is generated by Dehn twists (which we will define). In three dimensions, we will study knots – knotted loops in three-dimensional space – and 3-manifolds.

Prerequisites: Linear algebra, multivariable calculus, and a first course in abstract algebra (basic group theory). A first course in topology would be helpful, but is not required. 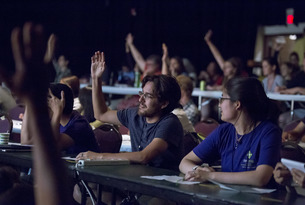