Joan Scott received her PhD in History from the University of Wisconsin, Madison.  She has taught at the University of Illinois, Chicago; Northwestern University; the University of North Carolina, Chapel Hill; and Brown University, where she was the founding director of the Pembroke Center for Teaching and Research on Women.  Since 1985, she has been a professor in the School of Social Science at the Institute for Advanced Study.

Joan  Scott's  work has challenged the foundations of conventional historical practice, including the nature of historical evidence and historical experience.  Drawing on a range of philosophical thought, as well as on a rethinking of her own training as a labor historian, she has contributed to the formulation of a field of critical history.  Written more than twenty years ago, her now classic article, "Gender: A Useful Category of Historical Analysis," continues to inspire innovative research on women and gender.  In her latest work she has been concerned with the ways in which difference poses problems for democratic practice.  She has taken up this question in her recent books: Only Paradoxes to Offer: French Feminists and the Rights of Man (1996); Parité: Sexual Equality and the Crisis of French Universalism (2005); and The Politics of the Veil (2007).  She has extended her work on the veil to examine the relationship between secularism and gender equality.  She has also prepared a collection of her essays that deals with the uses of psychoanalysis, particularly fantasy, for historical interpretation, The Fantasy of Feminist History (2011). Scott is a founding editor of History of the Present, a journal of theoretically-informed history.

Scott has been recognized with honorary degrees from a number of academic institutions, including Brown, Harvard, and the University of Bergen (Norway).  In May, 2009, she received an honorary doctorate from the University of Wisconsin–where she earned her PhD.  Several of Scott’s books have won prizes from the American Historical Association, which also awarded her the Nancy Lyman Roelker prize for graduate mentoring in 1995.  At its meeting in January, 2009, the AHA presented her with an award for Scholarly Distinction, the culmination of more than 40 years of research and writing in her chosen fields of French history, women’s and gender history, and feminist theory.  In June 2012, Scott received an honorary doctorate from Princeton University. 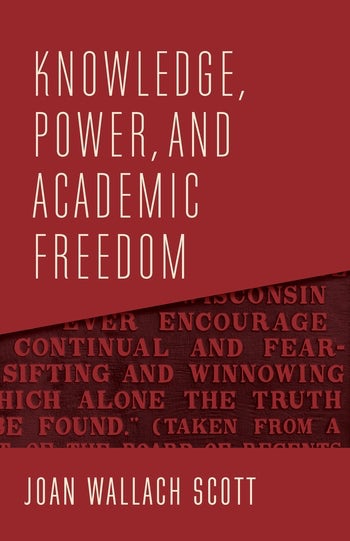