The Practice of Mathematics 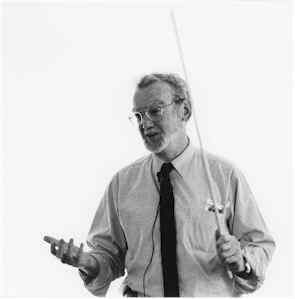 The Practice of Mathematics

There are several central mathematical problems, or complexes of problems, that every mathematician who is eager to acquire some broad competence in the subject would like to understand, even if he has no ambition to attack them all. That would be out of the question! Those with the most intellectual and aesthetic appeal to me are in number theory, classical applied mathematics and mathematical physics. In spite of forty years as a mathematician, I have difficulty describing these problems, even to myself, in a simple, cogent and concise manner that makes it clear what is wanted and why. As a possible, but only partial, remedy I thought I might undertake to explain them to a lay audience.

I shall try for a light touch including, in particular, some historical background. Nevertheless the lectures are to be about mathematics. In the first set, there will be geometrical constructions, simple algebraic equations, prime numbers, and perhaps an occasional integral. Every attempt will be made to explain the necessary notions clearly and simply, taking very little for granted except the good will of the audience.

Starting in the easiest place for me, I shall give, during the academic year 1999/2000 about eight lectures on pure mathematics and number theory with the motto beautiful lofty things . Beginning with the Pythagorean theorem and the geometric construction of the Pythagorean pentagram, I shall discuss the algebraic analysis of geometric constructions and especially the proof by Gauss in 1796 of the possibility of constructing with ruler and compass the regular heptadecagon. This was a very great intellectual achievement of modern mathematics that can, I believe, be understood by anyone without a great aversion to high-school algebra. Then I will pass on to Galois's notions of mathematical structure, Kummer's ideal numbers, and perhaps even the relations between ideal numbers and the zeta-function of Riemann. This material will be a little more difficult, but I see no reason that it cannot be communicated. It brings us to the very threshold of current research.

Since this attempt is an experiment, the structure and nature of the lectures will depend on the response of the audience and on my success in revealing the fabric of mathematics. If it works out, I would like to continue in following years on classical fluid mechanics and turbulence, with motto l'eau mêlée à la lumière , and then, with the somewhat trite motto с того берега, on the analytical problems suggested by renormalization in statistical mechanics and quantum field theory.