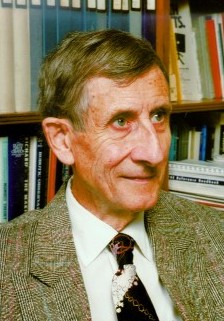 Freeman Dyson is now retired, having been for most of his life a professor of physics at the Institute for Advanced Study in Princeton. He was born in England and worked as a civilian scientist for the Royal Air Force in World War II. He graduated from Cambridge University in 1945 with a B.A. degree in mathematics. He went on to Cornell University as a graduate student in 1947 and worked with Hans Bethe and Richard Feynman. His most useful contribution to science was the unification of the three versions of quantum electrodynamics invented by Feynman, Schwinger and Tomonaga. Cornell University made him a professor without bothering about his lack of Ph.D. He subsequently worked on nuclear reactors, solid state physics, ferromagnetism, astrophysics and biology, looking for problems where elegant mathematics could be usefully applied. He has written a number of books about science for the general public. “Disturbing the Universe” (1979) is a portrait-gallery of people he has known during his career as a scientist. “Weapons and Hope” (1984) is a study of ethical problems of war and peace. “Infinite in All Directions” (1988) is a philosophical meditation based on Dyson’s Gifford Lectures on Natural Theology given at the University of Aberdeen in Scotland. “Origins of Life” (1986, second edition 1999) is a study of one of the major unsolved problems of science. “From Eros to Gaia” (1992) is a collection of essays and lectures, starting with a science-fiction story written at the age of nine, and ending with a mugging in Washington at age fifty-four. “Imagined Worlds” (1997) is an edited version of a set of lectures given in 1995 at the Hebrew University in Jerusalem about human destiny, literature and science. “The Sun, the Genome and the Internet” (1999) discusses the question of whether modern technology could be used to narrow the gap between rich and poor rather than widen it. “The Scientist as Rebel” (2006) is a collection of book reviews and essays, mostly published in The New York Review of Books. “A Many-colored Glass: Reflections on the Place of Life in the Universe” (2007) is an edited version of a set of lectures given in 2004 at the University of Virginia. Dyson is a fellow of the American Physical Society, a member of the U.S. National Academy of Sciences, and a fellow of the Royal Society of London. In 2000 he was awarded the Templeton Prize for progress in Religion, and in 2012 he was awarded the Henri Poincaré Prize at the August meeting of the International Mathematical Physics Congress.