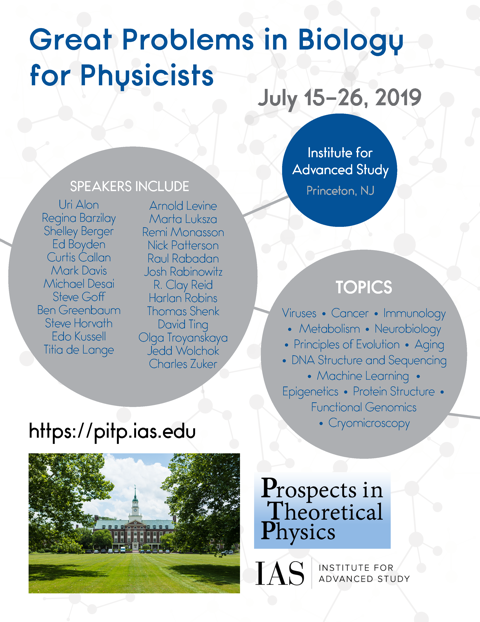 Details for the 2020 Prospects in Theoretical Physics (PiTP) program are posted here.

Prospects in Theoretical Physics is an intensive two-week summer program typically designed for graduate students and postdoctoral scholars considering a career in theoretical physics (for 2014 only the program was one week in length). First held by the School of Natural Sciences at the Institute for Advanced Study in the summer of 2002, the PiTP program is designed to provide lectures and informal sessions on the latest advances and open questions in various areas of theoretical physics.
The goal of the program is for the School of Natural Science at IAS, which mainly focuses in the training of postdoctoral fellows, to contribute in a small way to the training of graduate students as well. A special effort is made to reach out to women and minorities, as well as to graduate students coming from institutions with smaller graduate programs in theoretical science.
Prospects in Theoretical Physics builds on the strong relationship of the research groups at the Institute and Princeton University, and many faculty members from the physics departments at both institutions are actively involved in the program together with scientists from neighboring institutions.

The pilot program in the summer of 2002 was an introduction to string theory tailored to graduate students entering the field, where much attention was paid also to particle phenomenology and cosmology. PiTP 2003 was devoted to the problems and techniques at the interface of particle physics and cosmology. PiTP 2004 was a program for advanced graduate students in string theory, while PiTP 2005 was designed to provide an introduction to collider physics. The 2006 program covered recent advances in string theory that have found applications to gauge theories, integrable models, cosmology and mathematics, and the 2007 program - "The Standard Model and Beyond" - focused on particle physics phenomenology with special emphasis on model building. In 2008 the program - entitled "Strings and Phenomenology" - was designed for string theorists who wanted to learn about issues of compactification relevant to phenomenology and cosmology, and for phenomenologists who wanted to learn about strings and their applications to phenomenology. The 2009 program focused on "Computational Astrophysics" and was designed to assist young researchers in honing the numerical methods they employ in their own research and to learn about the techniques used in other areas of computational astrophysics. In 2010, "Aspects of Supersymmetry" was designed to give a coherent overview of the fundamental theoretical aspects of supersymmetry, emphasizing the common themes running throughout the subject, from the major advances made in the duality revolution of the 90's to the most exciting recent developments (integrability, M2/5 branes, N=2 theories and scattering amplitudes). An introduction to the formal aspects of SUSY breaking and softly broken SUSY at the weak scale was also given in parallel. The 2011 program, "Frontiers of Physics in Cosmology," explored the interphase between fundamental physics and cosmology, covering topics ranging from early universe cosmology to the late time acceleration of the cosmic expansion. "Computation and Biology" was the topic of the 2012 program, which explored a range of topics at the interface of theoretical computer science, statistical physics and quantitative biology. PiTP 2013 focused on "LHC Physics" and covered topics ranging from experimental results on the Higgs to prospects for physics beyond the standard model. 2014 was a unique year for the PiTP Program, which focused on "String Theory". The PiTP 2014 program was scheduled to last for only one week (instead of the usual two weeks) and to take place in June (instead of the typical July dates) so that it would immediately precede the STRINGS 2014 Conference occurring in Princeton from June 23 to June 27, 2014. PiTP 2015, "New Insights into Quantum Matter," was a joint program with the Princeton Summer School on Condensed Matter Physics, with one week held at Princeton and one week at the Institute. PiTP 2016, "Computational Plasma Astrophysics," was the 15th year program. PiTP 2017, entitled "Particle Physics at the LHC and Beyond," focused on topics ranging from experimental results in particle physics to prospects for physics beyond the standard model. For the 17th year of the program, PiTP 2018 “From Qubit to Spacetime,” took on subjects including entanglement in quantum field theory, black hole entropy, and complexity and gravity. PiTP 2019 was titled “Great Problems in Biology for Physicists” and was organized by the Simons Center for Systems Biology at the Institute for Advanced study. Machine learning, virology, neurobiology and immunology were among the topics for PiTP 2019.
Institute for Advanced Study
Einstein Drive
Princeton, New Jersey 08540
Email: pitp@ias.edu