The Distinguished Journalism Fellowship, launched in fall 2019, sponsors a three- to six-month term for leading journalists and editors. The purpose of the new fellowship program, which is part of the Director’s Visitors Program at IAS, is to protect journalistic freedom, encourage the transmission of novel and nuanced ideas, and advance trust in reporting. It underscores IAS’s commitment to truth and innovation in all forms, including the vital role of a free and informed press. With support from the Scully Peretsman Foundation, Joanne Lipman joins the program in 2019 as its inaugural fellow.

Joanne Lipman is one of the nation’s leading journalists and a bestselling author. A regular CNBC contributor, Lipman previously served as Chief Content Officer at Gannett Co., Inc., and as Editor-in-Chief of both USA Today and the USA Today Network, encompassing the flagship publication plus 109 local newspapers including the Detroit Free Press, the Des Moines Register, and the Arizona Republic. In that role, she oversaw more than 3,000 journalists and led the organization to three Pulitzer Prizes.

She has held senior editorial roles at The Wall Street Journal, where she was the first female Deputy Managing Editor and supervised coverage that won three additional Pulitzer Prizes. At the Journal, she created "Weekend Journal" and "Personal Journal," and oversaw the creation of the Saturday edition. Lipman was also founding Editor-in-Chief of Conde Nast Portfolio magazine, which won Loeb and National Magazine Awards.

Lipman’s work has been published in numerous outlets including The New York Times, The Wall Street Journal, Time, Fortune, Newsweek, and the Harvard Business Review. She has appeared as a regular television commentator on ABC, NBC, CNN, MSNBC, and PBS, among others. She is a frequent public speaker, with recent engagements with the World Economic Forum in Davos, the United Nations, the Aspen Ideas Festival, the International Lean In conference, West Point Military Academy, the Federal Reserve Board, and the Milken Institute Global conference.

While at IAS, Lipman will investigate the impact of machine learning and artificial intelligence on the media and on journalism specifically. She will also continue her work on gender in the workplace, and engage with scholars in the School of Social Science for its theme year on “Economy and Society.” 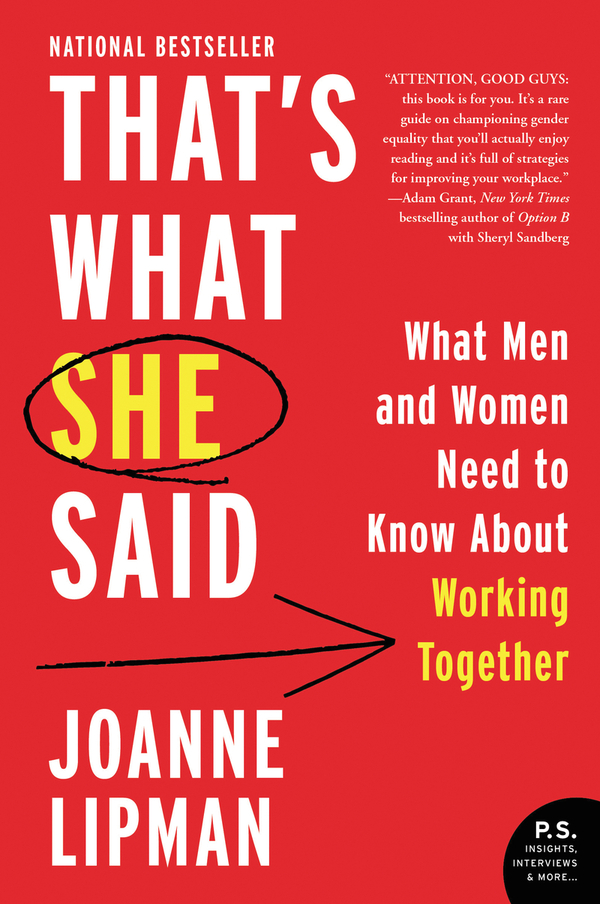 That's What She Said

The world has changed in the wake of the #MeToo movement. What comes next? In the No.1 bestselling That's What She Said, Joanne Lipman, former Editor-in-Chief of USA Today, offers real-world solutions and a path forward. There's no man-bashing here; Lipman explores how men as well as women can join together to close the gender gap. In this fast-paced book, packed with success stories and the newest data, she offers surprising insights into issues ranging from unconscious bias to child-rearing to brain differences between the genders, and provides practical tips that all of us can use, right now, to eliminate bias at work and at home.

That's What She Said has been featured in The New York Times ("revelatory"), The Washington Post (No.1 on Bestseller List), Time, USA TODAY, Fortune, Forbes, Vanity Fair, Glamour, The New York Post, and the London Sunday Times (a "must-read") in addition to ABC, CNN, MSNBC, CNBC, CBS, and PBS, among others.

In a TEDx talk in July 2019, Lipman discusses the importance of bringing men into the conversation of sexism and draws upon elements of her own research to reaffirm her ideas.

Joanne's interview with host Brian Stelter about the dangerous lack of female leadership in newsrooms—and what we can do about it.

When Jeremy Doyle and his wife had a baby boy last year, he took 12 weeks of paternity leave. Not many new dads take off that much time. But that wasn’t what made the San Francisco executive’s experience so unusual. This is: His paternity leave was mandatory.

How serious are we, really, about tackling income equality?

The Securities and Exchange Commission took a shot at it last week, approving a rule that would require companies to disclose their C.E.O. pay gap — comparing how much chief executive officers take home compared with ordinary employees.

That’s a fine idea. But here’s a better one: require companies to publish their gender pay gap.

Decades before Anita Hill, Gretchen Carlson or #MeToo, American companies dreamed up “diversity training,” typically a course that lasts anywhere from an hour to a couple of days, with the goal of wiping out biases against women and others from underrepresented groups. For most of its history, diversity training has been pretty much a cudgel, pounding white men into submission with a mix of finger-wagging and guilt-mongering.