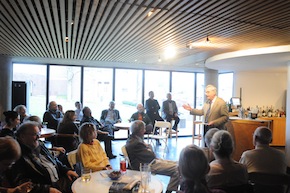 After Hours Conversations is a program of informal meetings that are held at Harry's Bar in the upper level of Simons Hall, from 5:00 pm till 7:00 pm, on Mondays and Thursdays, in October and November and again in February and March (here are some quotations).

Monday, October 15, 2012
Presentation by: Nathan Seiberg, School of Natural Sciences
Title: What Do We Learn from the Recent Observation of a Higgs-like Particle?"
Host: Helmut Hofer

Monday, October 22, 2012
Presentation by: Helmut Heit, School of Historical Studies
Title: There Are No Facts, Only Interpretations - Nietzsche on Science
Host: Patrick Geary

Thursday, October 25, 2012
[ cancelled due to scheduling conflict with another IAS event ]

Monday, November 19, 2012
Presentation by: Juan Maldacena, School of Natural Sciences
Title: What Happens When You Fall Into a Black Hole?
Host: Piet Hut

Thursday, November 22, 2012
[ no meeting this day; IAS is closed for the Thanksgiving holiday ]

Thursday, November 29, 2012
Presentation by: Lucas Bessire, School of Social Science
Title: The Many Lives of Geronimo (and Other Ex-Primitives)
Host: Didier Fassin

Thursday, February 14, 2013
Presentation by: Vladimir Voevodsky, School of Mathematics
Title: What Do We Call "Foundations of Mathematics"?
Host: Piet Hut

Thursday, February 28, 2013
Presentation by: Laurence Ralph, School of Social Science
Title: You Never Hear About the Wheelchair: What Urban Youth Have to Say About Our Guns
Host: Didier Fassin